Amelia is the grandaughter of Carlos Moreau and the owner of the Story Orbit Films blog. She is a college student and an aspiring amateur filmaker. She lives with her mother, Tanya, and their cats, Sofia and Nora, in their Providence, Rhode Island home.

When she was born it was her grandfather who named her. He chose to name her after Amelia Earhart. As a child, Amelia played in a soccer team and had a close relationship with her grandfather.

She works part-time at a video rental store with her best friend Vivian. They made tinfoil hats.

After her grandfather died, she began to investigate his apartment and personal effects. She would later start the Story Orbit Films blog to decode and decipher the cryptic belongings with the help of the Internet and Wallace. This would later cause her to uncover Carlos' connection to Plus Ultra.

Amelia's favorite drink is coffee milk and she is addicted to caffeine. She has shown exceptional skills in both the sciences and mathematics. She also inherited her grandfather's sense of optimism.

Amelia with her bike 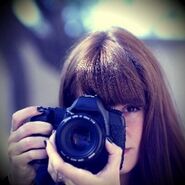 Amelia working in her room

Wearing her tinfoil fedora Vivian made her

Community content is available under CC-BY-SA unless otherwise noted.