Athena is an audio-animatronic robot girl from Tomorrowland, who was a close friend of Frank Walker.

In 1926, the organization of Plus Ultra holds a science exhibit at the Santa Monica pier entitled The World of the Future. As part of this exhibit, they had a display called the The Nuclear Family, where a butler serves members of a family of lifelike mannequins. The four members of this Nuclear family were named Nicholas, Marie, Bucky and Athena.

In 1957 the young girl robot Athena is created as a recruiter for Plus Ultra. At the 1964 New York World's Fair she invites the young Frank Walker into Tomorrowland after seeing great promise in him.

Frank remains in Tomorrowland and becomes close friends with Athena, until David Nix exiles Frank in 1984. During his time in Tomorrowland Frank discovers that Athena is actually a robot. Athena also leaves |Tomorrowland shortly after Frank, when David Nix suspends the Plus Ultra recruitment program and threatens to disassemble Athena, describing her as "obsolete".

Thirty years later, Athena looks unchanged when the former boy genius Frank returns to "Tomorrowland", and she plays a vital part in her adventure with Casey Newton. Her capabilities include x-ray vision, super strength and agility, and the ability to withstand significant physical damage. She is nuclear-powered and has the ability to self-destruct with tremendous force.

Athena is fatally damaged while saving Frank's life and tells him to use her self-destruct to destroy The Monitor in order to change the future and save the world. They tearfully says goodbye to each other, and Frank flies her to the top of the machine and drops her in. Athena explodes, destroying the machine and cutting off all power to the city. Her sacrifice is confirmed to have worked as a year later, when the world is still safe after the date of the “Inevitability” has passed.

Frank then builds new recruiter robots in Tomorrowland to continue Athena's mission to recruit people to see Tomorrowland, and thus to save the world from the destruction that The Monitor machine had been impelling humanity towards.

Frank Walker "You were many things, Frank Walker, but you were never dumb." - Athena to Frank.

Casey Newton "I'm the one that gave you the pin." - Athena to Casey.

Behind the scenes[edit | edit source] 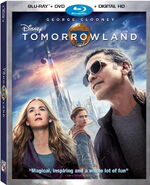 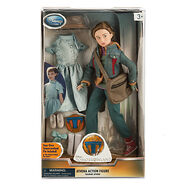 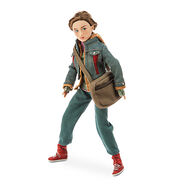 Add a photo to this gallery
Retrieved from "https://tomorrowland.fandom.com/wiki/Athena?oldid=7322"
Community content is available under CC-BY-SA unless otherwise noted.