David Nix is a human inventor, and the former governor of Tomorrowland.

Frank Walker first encounters David Nix at the 1964 New York World's Fair, where he acts as a judge at the Inventor's Fair, by which time he is already Governor in Tomorrowland.

When the young Frank enters "Tomorrowland", Nix is initially unimpressed by the boy and his jet-pack. However, Frank stays and there develops a close relationship with Athena, a friendship later described by Athena as partly an "experiment" undertaken at the suggestion of Nix.

Nix serves as a mentor to young Frank through his teenage years and into his twenties. Together they work on new technologies. After using The Monitor's future-glimpsing powers to discover that the world had a one-in-ten chance of ending, Nix secretly uses The Monitor to broadcast pessimism into the minds of humanity. Nix hopes to spur humanity into an awareness of their plight. But humanity begins to enjoy wallowing in pessimism, and when Nix continues broadcasting this causes the world's end to hasten and The Monitor's glimpses of a possible future become a self-fulfilling prophecy.

In January 11, 1984, Nix sends a letter along with a specially-encoded P.I.N. to Steve Jobs. Nix, apparently impressed by Jobs' views on marketing and the art of persuasion (having come to believe in the 'better' versions himself) wanted to give Jobs a taste of the campaign they had previously discussed, although according to Nix, that campaign was currently being revised. Nix advises Jobs to enjoy the pin's effects while it lasts.

Sometime later that year, Nix, convinced that humanity will never be able to enter Tomorrowland, cancels the Plus Ultra recruitment programme, and describes the Athena class recruiting robots as "obsolete". In 1984 Nix exiles Frank from Tomorrowland, for an unspecified reason. Soon after this Athena takes 12 pins and also departs from Tomorrowland.

Thirty years after Frank left Tomorrowland he returns with Athena and Casey Newton, using the Spectacle rocket-ship and the old Running Start method of entry. The trio find that Nix has soured and allowed Tomorrowland to decay. But, mysteriously, Nix himself seems to be only a little older than he appeared in 1964.

Nix opens a portal and tries to deport the trio to an uninhabited island, but they fight back. Nix is pinned by part of the portal after it was destroyed by Frank's device. As a final act of revenge Nix tried to kill Frank, but is stopped by Athena who takes the blast. Casey disarms him and he watches helplessly as Frank destroys The Monitor. The Monitor's remains fall on Nix, killing him.

Behind the scenes[edit | edit source] 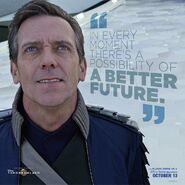 Add a photo to this gallery
Retrieved from "https://tomorrowland.fandom.com/wiki/David_Nix?oldid=7319"
Community content is available under CC-BY-SA unless otherwise noted.