Thomas Alva Edison was an American inventor, entrepreneur, and one of the founding members of Plus Ultra and Tomorrowland, along with Nikola Tesla, Jules Verne, and Gustave Eiffel. He developed and improved many inventions and innovations such as the phonograph, the kinetographic camera, the motion picture camera, and the long-lasting, incandescent light bulb.

He was also known for his ongoing rivalry with fellow Plus Ultra founder Nikola Tesla, particularly over direct current (DC) and alternating current. Despite the rivalry, when it came to Plus Ultra and Tomorrowland, they were able to overcome their dispute and work together to create a better future. 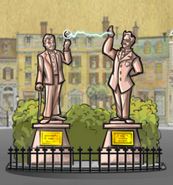 The sparks between them. 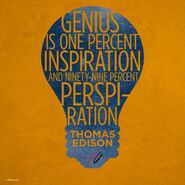 Add a photo to this gallery
Retrieved from "https://tomorrowland.fandom.com/wiki/Thomas_Edison?oldid=7160"
Community content is available under CC-BY-SA unless otherwise noted.