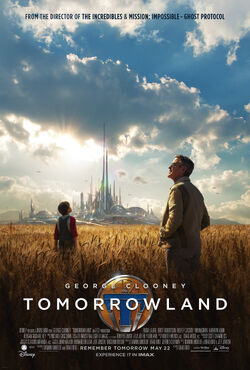 Tomorrowland is an American science fiction mystery adventure film released in 2015. The film's working title was 1952 until it was retitled to Tomorrowland, which is also the name of a futuristic themed land found at Disney theme parks.

Bound by a shared destiny, a bright, optimistic teen bursting with scientific curiosity and a former boy-genius inventor jaded by disillusionment embark on a danger-filled mission to unearth the secrets of an enigmatic place somewhere in time and space that exists in their collective memory as “Tomorrowland.”

In Order of Appearance[]